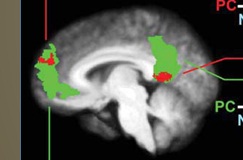 The MSACD Project has been involved since the late 1980s in a longitudinal study of children who were prenatally exposed to cocaine. Both children who were exposed to cocaine before birth and non-exposed children were recruited forthe study; they have been followed into their teen years.  Beginning with the adolescent follow-up, we worked with an expert in brain imaging, Dr. Xiaoping Hu, Emory Department of Biomedical Engineering. The goal of this study was to examine effects of prenatal cocaine exposure on teens, especially on how their brains work. The teens were asked to complete magnetic resonance imaging sessions (MRI) at Emory University Hospital. Images or pictures were taken of how the brain works. The cocaine-exposed teens showed patterns of brain activation that were different from those in the non-exposed teens. The cocaine-exposed adolescents were more affected by emotional arousal than the non-exposed teens. This result is very important because it is similar to behavioral and physiological findings when the children were younger.  Prenatal cocaine exposure consistently affects later emotional regulation.

Dr. Xiaoping Hu and MSACD researchers are now collaborating with another brain imaging group at the University of Georgia to examine how prenatal exposure to cocaine alters connections in the brain and brain networks. In this phase of the project, the brain scans collected in the teen follow-up study are being examined again. New, more advanced methods are now available to define or map brain networks. The researchers will compare the networks and patterns of connectivity in the cocaine-exposed and non-exposed teens. Eventually, the differences in the brain networks will be related to other measures from the study such as teen behavior, emotional adjustment, and cognitive processes.

Papers based on this study: