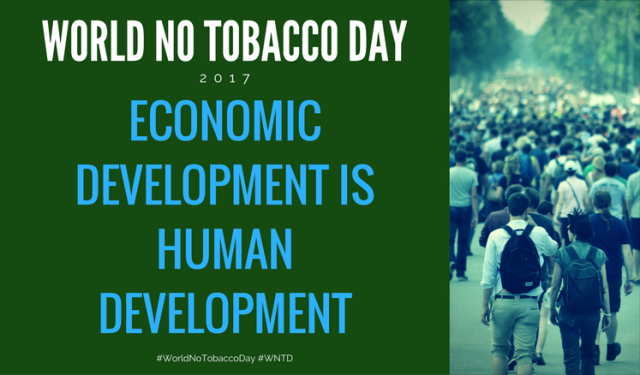 Summary: In the United States, more than $300 billion, and globally, about $1 trillion are lost each year due to illness and lost productivity related to tobacco use.

On this World No Tobacco Day, we join with other nations in recognizing the harmful effects of tobacco use on economic development and tobacco’s contribution to poverty. These harms call for a world-wide commitment to support evidence-based tobacco use prevention and cessation measures to reach people who are most severely affected by tobacco-related diseases.

The National Cancer Institute, in collaboration with the World Health Organization, recently published a report confirming that evidence-based interventions make sense from an economic as well as a public health standpoint. That report, The Economics of Tobacco and Tobacco Control, further noted that there are nearly 1.1 billion adult tobacco users globally, and that the healthcare costs and lost wages from tobacco-related diseases are enormous.

In the United States, more than $300 billion, and globally, about $1 trillion are lost each year due to illness and lost productivity related to tobacco use. These losses include both healthcare and indirect costs such as lost wages and family care. It is also important to recognize that these economic challenges impact the poor disproportionately. Today, around 80 percent of the world’s smokers live in low- and middle-income countries. Simply put: Tobacco use hurts economic progress in developing countries and harms the economic well-being of people throughout the world.

Here in the United States:

We can reduce the health and economic damage of tobacco use with policies and programs that are proven to work across different countries and economic conditions. There are numerous evidence-based strategies and interventions available, many of which are described in the 2014 Surgeon General’s report, The Health Consequences of Smoking – 50 Years of Progress.

The Department of Health and Human Services is committed to increasing public education and awareness around the harms of tobacco through campaigns like CDC’s Tips From Former Smokers and FDA’s The Real Cost. Additionally, the national quitline portal (1-800-QUIT-NOW) and Smokefree.gov offer free information and resources to help individuals of all economic backgrounds quit using tobacco and remain tobacco free.

World No Tobacco Day (#WorldNoTobaccoDay) is an opportunity to celebrate the progress we have made against the global tobacco epidemic. But more effort is needed to ensure that this progress also benefits the poorest populations, those who have the least access to resources and information and have the highest levels of tobacco use and tobacco-caused disease.